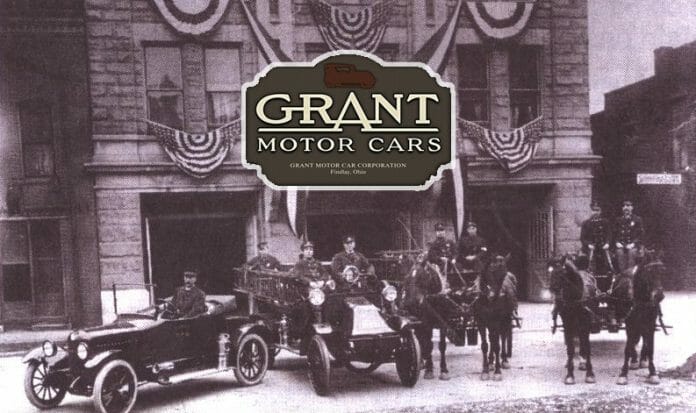 The popularity of a newfangled mode of transportation called the automobile had a remarkable effect on the country. People could travel farther and faster, thanks to Henry Ford. At least four companies manufac­tured motor vehicles in Findlay for a time including Grant and Adams Brothers Co.
The Findlay Motor Car Co. pro­duced passenger cars from 1910-13 in the old Findlay Axe and Tool plant at the foot of Santee Avenue. Then the company failed, and was taken over by a group of Detroit businessmen

The deal to buy the Findlay Motor Co., 400 Santee Ave., by the Grant Motor Co. of Detroit, Mich., was closed on November 25, 1913. It was anticipated that within future years 250 men would be needed for the building of the Grant, to sell for $495.

Production began on December 1, 1913. By April of 1914, the company was turning out 25-30 cars each day and employed more than 100 workmen, but in May, 1914, more than 30 workers went out on strike.
February of 1915, saw the company leasing the Findlay Table Manufacturing Co. located on Western Ave., north of Lima Ave. as an auxiliary plant. The chassis of the car was built at the Santee factory and then moved to the south side factory for finishing and shipping. They doubled their output to 40 autos per day. At this time, advertising in the Saturday Evening Post, among others, was being used to tout the Grant car, and the cars were being shipped to California, New York and England. It cost $910 to ship six cars via Wells-Fargo, to Los Angeles, California. By September, 1915, 200 men were employed at both factories and the company planned to turn out 10,000 machines during 1916.

Additional space was added to the south side plant. Two new annexes were used as a service station and a test department. At this time they were making 6 cylinder cars, exclusively. The largest number of cars was produced in 1915 and plans for the cabriolet model to come out in 1916 were made.
The Grant Motor Co. became the Grant Motor Co. Corp. on March 9, 1916 and reorganization took place. At that time the company said it had no intention of leaving Findlay, but would expand.

However, May 6, 1916, announcement was made that the Grant Motor Car Corp. would move from Findlay to Cleveland thus moving Findlay’s largest industrial plant. Better shipping facilities and improved labor market were given as the reasons for moving.

On November 16, 1916, the Grant Motor Co. closed their Findlay offices. On March 11, a tornado severely damaged what was once the Grant Car Co.