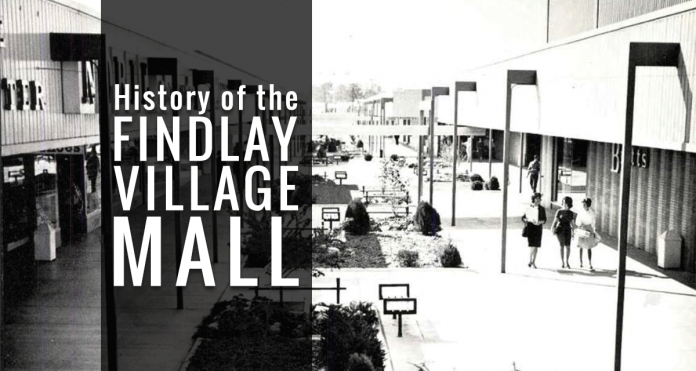 Developed by prolific mall builder Edward J. DeBartolo, Sr., what is now the Findlay Village Mall was opened in 1962 as the Fort Findlay Village Shopping Center—two plazas anchored by JCPenney and Britt’s, a more upscale version of JJ Newberry. Sears joined them in 1963.

The mall was enclosed in the 1970s, and in 1990, the mall underwent a major $16 million renovation, expanding the building from 334,247 square feet to 526,530 square feet. Britt’s was replaced with Kmart, and a new wing was added with an Elder-Beerman store and approximately 55 smaller retail stores. Elder-Beerman closed in 2018.

Kmart closed in 2003. A year later, the space was divided into Best Buy and TJ Maxx, which both still remain today. In 2010, the mall lost the Findlay Six theater, which had been at the Tiffin Avenue location since the 1970s. The theater sat empty until in 2014 Cedar Creek Church expanded to Findlay moving into the theater’s space. That same year, Sears closed its doors followed by Jo-Ann Fabrics. In 2017, Big R – a farm, home, and western store – opened in the former Sears location. JC Penney closed its doors in 2017, as well.

Today, the Findlay Village Mall is used for more than just shopping. In addition to its stores, the mall hosts a number of activities and events, such as the annual Car Show, the Home Show, and of course visits from Santa and the Easter Bunny! The mall is also home to the Children’s Museum of Findlay, which opened in 2014. This museum features hands-on exhibits that encourage growth and education for kids aged birth to ten years.

What is your favorite memory of the Findlay Village Mall? Leave a comment below!