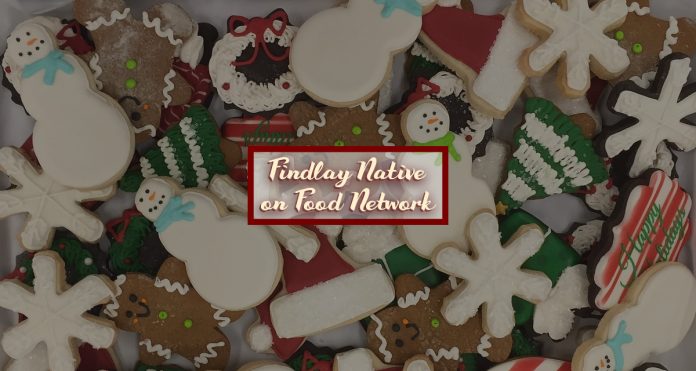 Dave Okapal, a Findlay native known as “Baker Dave,” made his Food Network debut in 2009 on the Food Network Challenge: Extreme Wedding Cakes. His brother-in-law, Frank Urso, was a contestant on the show, and chose Dave as his partner. The team won the silver medal. His second Food Network appearance will premier November 19th at 10pm. Episode 5 of the “Christmas Cookie Challenge” will see 5 bakers compete in a series of elimination rounds until one wins a $10,000 grand prize.

Social Findlay caught up with Baker Dave to learn more about his rise through the baking ranks.

Dave attended St. Michael’s, Glenwood, and Findlay High School (class of 1991). His first bakery work experience was at the Baker’s Delight, which was located in the Argyle Building on the 500 block of South Main Street in Findlay. He describes Findlay residents as “some of the warmest people you will ever meet,” and misses being around them. He also misses Dietsch’s ice cream!

Baker Dave obtained an Associate of Applied Science in Pastry Arts from Johnson and Wales University. Upon graduation, he relocated to Atlantic City to work at Trump’s Taj Mahal and Castle. From there, he became a wedding cake decorator at The Hotel du Pont in Wilmington, Delaware. He had never made a wedding cake before taking that role, which required the creation of up to 25 wedding cakes per week! From this experience, Okapal gleaned the wisdom that “The best way to succeed is to do things that you’ve never done.” For the last 15 years, he has been the pastry chef at Temple University in Philadelphia. Episodes of his weekly show on Temple University Television, “Baker Dave Presents,” can be found here.

Okapal credits two particular mentors for his success as a baker: Alfred Kever of Trump’s Castle, and Steve Siebeneck of the Bakers Delight. For aspiring bakers, he advises “to do what you love, and the money will come. Also, always put yourself in uncomfortable situations, it is the only way that you know what is possible.”

You can follow Baker Dave on Instagram (@bakerdave), Twitter (@tubakerdave), Facebook, and YouTube. Don’t forget to tune into the Food Network on November 19th to see who bakes their way to the top prize! The episode will air several times if you can’t tune in for the premier.