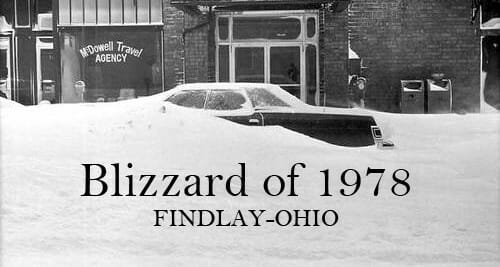 The 1970s. It was the era of Kent State and Watergate.
The Iran hostage crisis.
Legionnaire’s Disease and the nation’s bicentennial.
But the thing people probably remember most is the snow.
The blizzard of 1977 was de­scribed, perhaps inaccurately, as the worst snowstorm to ever hit the area. Findlay was laid low by record-breaking cold and 12 inches of snow.
As it turned out, the real bliz­zard did not arrive until one year later.
January 1978 was a month plagued by storms.
Gusting winds whipped snow into drifts and created treacherous driving conditions Jan. 8-9. A sec­ond storm a week later dumped three more inches on the ground.
As the Findlay area attempted to dig its way out, a third storm arrived Jan. 20. Winds gusting as high as 39 miles per hour caused 5.2 inches of new snow to drift over area roads.
Less than a week later, the real blizzard hit with a vengeance.
A night of freezing rain pre­ceded nine inches of snow. High winds, bitter temperatures and snow paralyzed the area for sever­al days.
Roads were blocked. Power, wa­ter and phone service were dis­rupted. Neighbors banded together to battle the cold and share dwin­dling food supplies.
President Carter declared a fed­eral state of emergency in Ohio, Indiana and Michigan. Ohio Na­tional Guard and U.S. Army troops were called on to help with recovery operations.
At least 12 people in Hancock and four area counties died from weather-related causes. The only Hancock County death was Otis Van Sickle, 81, of McComb, who suffered from frostbite after spending more than 24 hours in his unheated home.
Findlay officials estimated the storm cost the city more than $188,000, not counting another $80,000 to repair streets damaged by cold, snow and ice.

Click on the photos to enlarge them. To see the caption, click the ‘i’ symbol in the right hand corner.