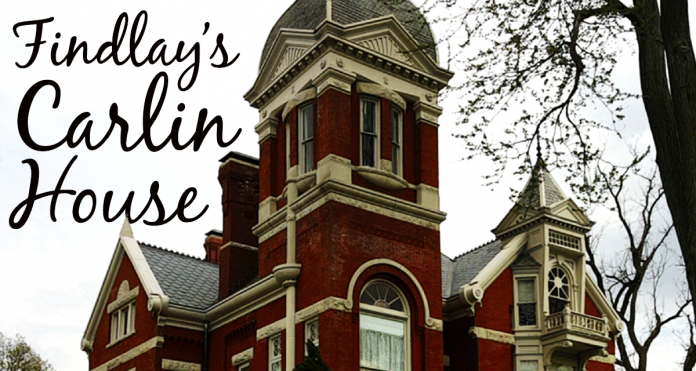 The winner of Social Findlay’s 2016 South Main Street Houses contest was 1109–the Carlin House! Thanks to everyone who voted. As a prize for winning, we gifted the Leister family a Social Findlay mug and some coffee and a cookie donated from Coffee Amici.

Carlin House (c. 1885), 1109 South Main Street, was built by William L. Carlin, grandson of Squire Carlin who helped to establish the town in the early 1820’s. William L. Carlin was Mayor of Findlay in 1886, and later became a state senator from 1888 to 1890. The house is built in the Victorian Gothic style and is filled with decorative motifs: a massive tower, intricate brick patterns, and elaborate woodwork are among these details. It is a single family residence of about 6,694 sq. ft. , 22 rooms, 11 fireplaces with 3-brick-thick walls.

In 1894, Seabury Newton Emery Priddy bought the Carlin house for $11,000. After he died in 1912, his wife, Elizabeth, sold the house to William and Nelle Brown for $12,000. They extensively remodeled and redecorated the house. In 1920, H. Fort and Sara Mather Flowers purchased the house and named it “High Tower.”

60 years later, in 1982, Mike and Cindy Leister purchased the house. Cindy, teacher and counselor, appreciated the heritage of the South Main Street properties. Through many many countless hours of  work, the Leisters restored this home during a time of revitalization in this part of Findlay. “We feel like this home loves us,” states Cindy. Over the years, the Leisters have opened their home to a number of Findlay’s civic and cultural groups for luncheons and home tours, including the 1988 and 2000 Findlay Historic Homes Tours, and the 1996 Victorian Dinner.

Music Bingo with DJ D. Will