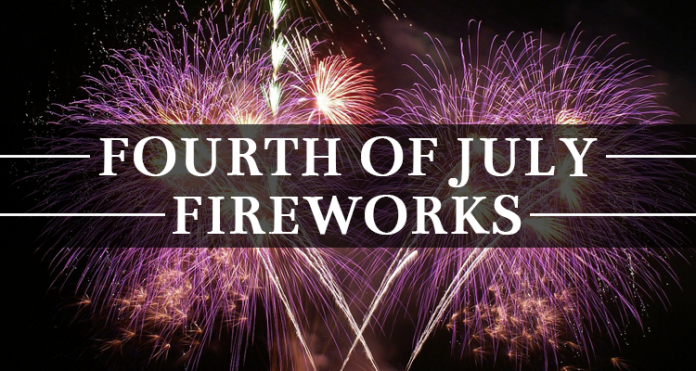 If there’s one way to celebrate Independence Day, then that way is with some fireworks! From classic sparklers to the big explosions in the sky, fireworks have become a Fourth of July tradition. Findlay and its surrounding areas have no shortage of firework displays, and we’ve got a list of all the best Fourth of July celebrations that your whole family can enjoy.

Findlay’s Independence Day celebrations will begin at 4 p.m. Sunday, July 3, at the Hancock County Fairgrounds.
In addition to fireworks shooting off at 10 p.m. with simulcast music on WKXA, the celebration will include live music, food and family activities.
Some of the main events will include a Ninja Warrior competition, where the top three finishers in each division will earn their way into the finals at the Hancock County Fair along with winners from other area fairs. The two divisions are youth 18 and under and adults 19 and over. Entry to the competition will cost $5.
There will also be a music stage featuring rock groups, including Tongue ’n Groove, playing until 10 p.m.
Several food concessions will also be available off the midway and down the side streets near the Ninja Warrior course.
Sponsors include The Courier; 1330 WFIN; 100.5 WKXA; 106.3 The Fox; Owens Community College; Ohio Logistics; Blanchard Valley Chiropractic; and Farthing Real Estate & Auctioneers, Inc.
Celebrations will continue the next day with the annual Fourth of July parade in downtown Findlay, starting at 11 a.m. on Main Street.
The Findlay Country Club will also be having a fireworks display on Sunday, July 3, beginning at dusk.

The Toledo Blade’s annual Red, White and KaBOOM Independence Day celebration will begin at 4 p.m. Monday, July 4, at the Marina District on the east side of the Maumee River along Riverside Drive, moving from Promenade Park because of construction.
Advertised as “the largest fireworks extravaganza in northwest Ohio, the fireworks will be synchronized to music playing on WRVF 101.5 “The River.”
Prior to shooting off fireworks at dusk, the Together Band will perform at 6 p.m., followed by the U.S. Army Concert Band and Soldiers’ Chorus.
The celebration is free to the public, but there will be a charge to park inside the marina. All traffic entering must use the Marina Drive entrance off Front Street.
Food and drink will also be available throughout the gathering. A portion of the event’s proceeds will go to the National Museum of the Great Lakes.

The fireworks will be set off around 10 p.m. Monday, July 4, at the Walsh Park hill. The best views are from Roger Young or Walsh parks. Music associated with the show will be played on WFRO.
The Fremont Ohio Fourth of July Committee collected $20,000 in donations for the annual fireworks event, boasted as one of the largest in northwestern Ohio. Donations are still being accepted.

Tiffin’s fireworks will be held at 10 p.m. July 3 at Hedges-Boyer Park, put on by the city’s Parks and Recreation Department.
There will be activities, games, contests, and music from up-and-coming artist Eric Sowers from 6 p.m. to 10 p.m.

The 23rd Annual Star Spangled Spectacular, a series of events, will be held at Faurot Park beginning as early as 8 a.m. Monday, July 4, with the fireworks taking off at 10 p.m.
Festivities will also include the Freedom 5k run/walk dedicated to military veterans beginning at 9 a.m. by the cannon on Cole Street in Faurot Park. Pre-registration offers the best deal at $15 and a guaranteed shirt and goodie bag, but same-day registration will be accepted at $20.
Other Fourth of July events at the spectacular include baseball games, Freedom Fun Rides by Cranker’s Cycling, kids rides, a car show, live music by the Lima Area Concert Band, Phase 5, and the United States Army Field Band Jazz Ambassadors and the passing out of flags just before the fireworks.
There will be shuttles and concessions.

Fostoria’s Annual Fourth of July Celebration and Fireworks Display at Foundation Park will be held Saturday, July 2.
Music by DJ Kalen Bloom of Rhythm N Bloom, LLC DJ Services will begin at the amphitheater at 6 p.m., and food vendors will be set up at the park along with the concession stands.
The Geary Family YMCA will host a “Vintage Baseball Game” starting at 6 p.m. at the park, and the sixth annual Fostoria’s Got Talent contest begins at 8 p.m. Fostoria residents are welcome to show off their talents for a chance to win prizes such as gift cards to local stores and restaurants. The registration is free and opens at 7 p.m. to the first 20 residents to sign up. The three age groups are as follows: 5 to 12, 13 to 17 and 18 and up. Winners from the previous years can compete again.
The fireworks display starts at dusk and the rain date is Sunday, July 3.

The Ladies Auxiliary of McComb’s Veterans of Foreign Wars Post will host McComb’s fireworks at 10 p.m. July 2 at the McComb Village Park. There will be food vendors and karaoke before the show.

Bluffton will host its fireworks during the Third Annual National Night out event on Aug. 2 at the community pool. The village is looking for donations from the community to cover the costs of the celebration.

Ottawa’s fireworks and Patriotic concert will begin at 9 p.m. July 3 on the north lawn of First Baptist Church at 8115 N. Main St.

Boasted as the “most recognized firework display in the Midwest,” the 36th annual Red, White & BOOM! fireworks display in Columbus will happen Friday, July 1. Festivities are free and open to the public, but a VIP ticket costs $110.
The festivities will begin at 3 p.m. with the Arena District’s Taste of BOOM! on Nationwide Boulevard, featuring the best of Columbus foods. The Ford Oval Parade will begin at 6 p.m. on the Main Street Bridge, and the Columbia Gas’ Children’s Park will be filled with interactive children’s activities including inflatables, a dunk tank, COSI on wheels, face painters and more.The fireworks will begin at 10 p.m. from Genoa Park. Live broadcast of the firework show can be viewed on NBC4 and nbc4i.com.hx