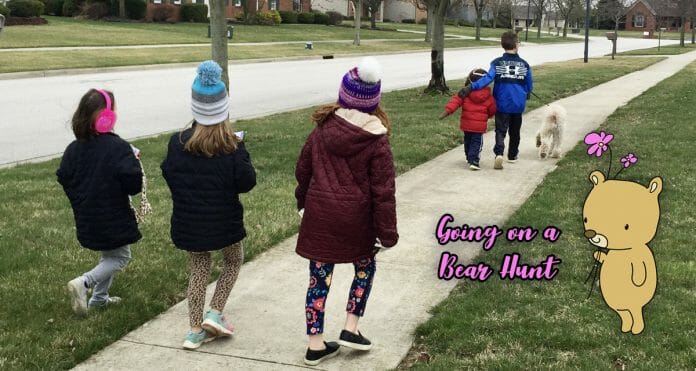 One neighborhood on the east side of Findlay is doing all it can to “bear” this unusual time. The neighborhood, situated between County Road 236 & Fostoria Avenue, behind StoneBridge Church, has organized two fun family activities.

Sarah Steiner’s mother shared an idea she had heard about: a neighborhood “bear hunt.” Taking a leaf from Michael Rosen’s children’s book & song, “We’re Going on a Bear Hunt,” families put teddy bears in their front windows for all to see. Sarah loved the idea. “We have 5 kids, so anything we can do to get people outside to burn off some energy! The dog enjoys the walk, too.” She texted a few neighbors, who texted others.

Some parents are implementing math skills in the hunt, such as counting homes, or bears. At least 32 houses displaying bears on Day 1 of the Bear Hunt! The Steiner children carried notebooks and pencils to tally bears. They spotted 87, and didn’t even walk down every street!

Steiner and her neighbors brainstormed to come up with new themes for the coming weeks. “I don’t know how many weeks we’ll be stuck inside, but we can always add more! We could relate them to books, and so much more,” said Steiner. The theme for the week of March 30th is Disney Characters. The week after that is Easter themed.

As Steiner sent her first text message, it turned out another neighbor, Krista Watchman, was also in the process of planning a similar activity. The two were excited to learn of their correlating ideas. Watchman’s “Neighborhood Window Walk” is a her spin on a friend’s suggestion. Participants decorate windows with a drawing based on a theme.

“A friend in Columbus texted the ideas. They’re picking a new theme every 3 days, but we’ll be doing ours weekly.” The first theme was “Silly Faces,” which inspired a lot of emojis. Starting on March 27th, the theme will change to “Animals.” On the 3rd, it becomes “Encouraging Words,” and from the 10th of April, “Easter/Springtime.

On Findlay’s west side, Western Meadows also hosted a Bear Hunt on March 23rd. Kallie Allen’s daughter participated. The version of the story she listens to the most has a line about binoculars, so she made some!

“I’m so encouraged that everybody has been so great about trying to help out,” said Steiner. “Some of the elderly neighbors are participating by waving through the windows. It helps build a sense of community, and has just been a fun way to encourage those who can’t leave their houses.”