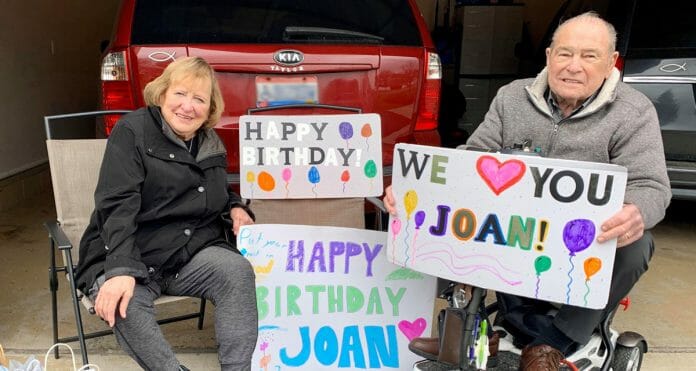 Letting Joan Simon’s 80th birthday slip by quietly was not an option for the Timberwood Drive neighborhood. Joan and her husband, Dick, and longtime Findlay residents. Their children & grandchildren had grand plans of surprising her, but Covid-19 through that plan by the wayside.

So, on Tuesday, March 31st, approximately 50 people came together (while respecting social distancing) to help Joan celebrate. They met in the Brinkman’s parking lot before parading to her home. Some sang to her from their cars, and others from the sidewalk. Many made signs for the makeshift party.

Joan and Dick are longtime Gateway Church members. Sherry Shultis, a friend from Gateway, had the idea to put this event together. She managed to wrangle up Gateway families, including Joan’s women’s bible study friends. Upon hearing all the commotion, some of Joan’s neighbors came out to spectate and join in.

In addition to “Happy Birthday,” Joan was also serenaded with a rendition of one of her favorite hymns, “Amazing Grace.”

After the surprise, Joan said through her tears, “80 sounded terrible, but it doesn’t sound so terrible anymore. I can’t believe I’m 80. I want to live to be 100 now!” She is overjoyed to be surrounded by a loving family of neighbors.

Thank you to Kayla Towell for sharing the images and video.