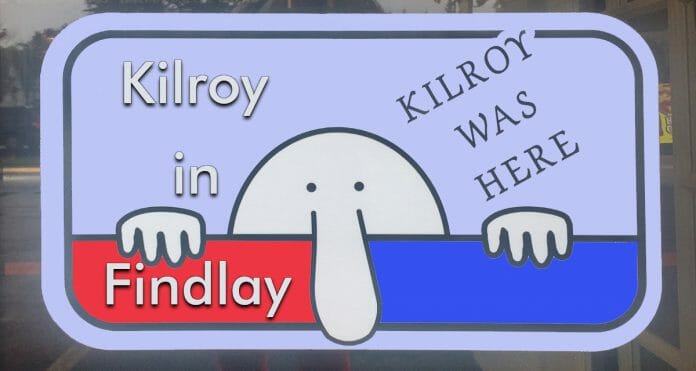 Have you seen the ‘Kilroy was here’ signs around town? The Courier ran an article about the signs back in 2014, when they were visible all over – including on billboards – but don’t think he’s vanished! You can still find him out and about. He even has his own local Facebook page!

Kilroy had his start during World War 2. There are several stories about the origin of the image, but the most popular one was detailed in a recent Courier article about a related project started earlier this year. In short, Kilroy was an inspector during the war. He left his mark to make sure riveters weren’t cheating the system to get higher pay. Kilroy’s saying and image started showing up in unexpected places, so it stuck.
The article above also discusses a limited run of 8,169 cans featuring Kilroy created earlier in the year by Ball Metal.  An auction of the cans helped pay for the 2017 Kilroy campaign, and the “Save the 22” project.  “Save the 22” is a locally-initiated AMVETS Department of Ohio organization that brings help to veterans through suicide prevention and PTSD awareness. By putting Kilroy’s image in public areas, veterans are encouraged to open up to friends and family about their experiences.
You can learn more about “Save the 22” by emailing amvetssavethe22@gmail.com or by visiting their Facebook page.