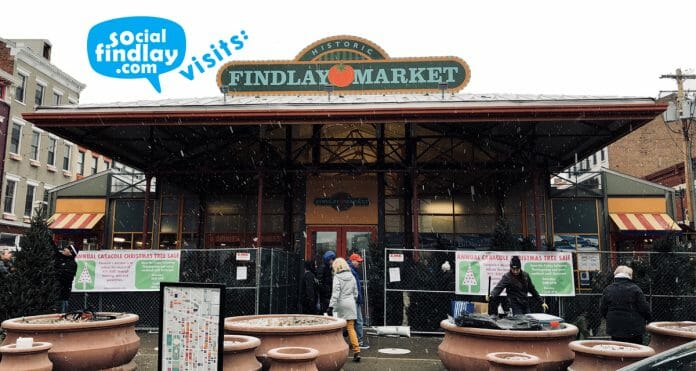 Social Findlay was in Cincinnati, and couldn’t pass up the chance to visit Findlay Market, for obvious reasons. We’re glad we did! If you take away anything from this article, let it be this: make sure you’re hungry if you visit Findlay Market. It’s pretty impossible to walk into this historic Cincinnati market and not eat anything at all.
Findlay Market is located in the historic Over-the-Rhine district of Cincinnati, just north of downtown. It is the oldest municipal market in Ohio, having opened in 1855. An array of merchant stalls fill the building, including butchers, cheese mongers, ready-to-eat food, produce, and more. There is a stall that offers dozens of varieties of bacon, one that sells homemade pasta, and another displaying hundreds of spices. Specialty, import, and locally-made-goods stores line the market in surrounding buildings. Because of all the shopping and eating opportunities, we suggest giving yourself at least 2 hours to wander the market square.
By now, you may have correctly guessed by the name that it has some ties to our city here in Northwest Ohio. General James Findlay and his wife, Jane, moved to Cincinnati in 1793. He served as mayor from 1805-1810, starting his term just 2 years after the city was incorporated, and 12 years after its name was changed from ‘Losantiville.’ 2 years after the end of his term, during the War of 1812, he founded Fort Findlay in what is now Findlay, Ohio.
Findlay co-owned a general store near the Ohio River, and also purchased a big plot of land in what is now the Over-the-Rhine area. He unfortunately died before the land was developed, but his original intent to build a market was still made reality. The designated market area was donated to the city, and opened in its present form 20 years after his death. It was named in his honor. His grave can be visited at Spring Grove Cemetery in Cincinnati.
We think General Findlay would be happy to know a farmers’ market now takes place in his fort city every year!


More interesting history about the market, Cincinnati, and Gen. James Findlay can be found on the Findlay Market website.