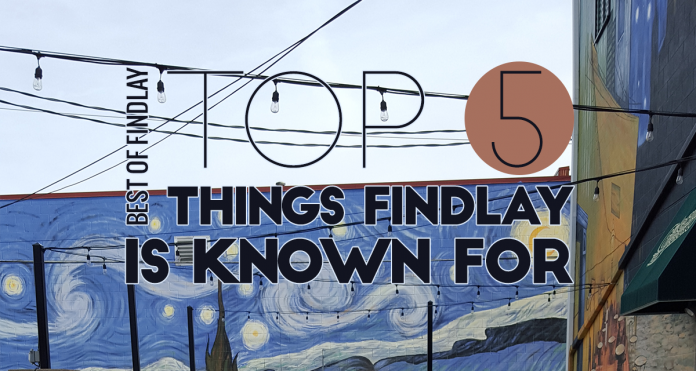 Findlay is an industrial and cultural landmark in Northwestern Ohio. We are home to major corporations, delicious food, and a thriving art and music scene.

Marathon Petroleum Corporation originally came to Findlay in 1914. It is a major employer in the area and has contributed greatly to the revitalization of Downtown Findlay, the most recent contribution being the new Marathon Center for Performing Arts.

Dietsch Brothers has been a Findlay staple since it opened in 1937. TripAdvisor has named Dietsch Brothers one the of top US ice cream establishments several times, most recently this past year. Be sure to stop in for some delicious chocolate-covered pretzels, some classic Ohio Buckeyes, or any of their incredible ice cream.

Cooper Tire arrived in Findlay in 1922 and is the home of the corporate headquarters to over 60 manufacturing, sales, distribution, technical and design facilities within its worldwide family of subsidiary companies. The Findlay location employs 1,964 employees (2014) and the company recently celebrated it’s 100 year anniversary of being founded in 1914.

The University of Findlay, founded on January 28, 1882 by the city of Findlay and the Churches of God General Conference, is a private university with an enrollment of 3,700 students and a campus that spreads over nearly 400 acres of the Findlay Landscape. UF has been recognized as a “Best in the Midwest” college by the Princeton Review, is consistently in the top tier of U.S. News & World Report’s “America’s Best Colleges,” and has been recognized as one of “America’s Best Private Colleges” by Institutional Research and Evaluation Inc. GO OILERS!

Established in 1936, Wilson’s Sandwich Shop is a Findlay institution. It is often ranked as one of the top original burger joints in Ohio, and their ordering process, until recently, required an instructional video. It has hosted several famous people, including Vice President Joe Biden, singer Johnny Mathis, former US Senator George Voinovich, and former Vice President Dan Quayle. So whether you’re people watching, wanting to experience some Findlay history, or you’re just hungry, remember to stop in for a hamburg, fries, and a malt. 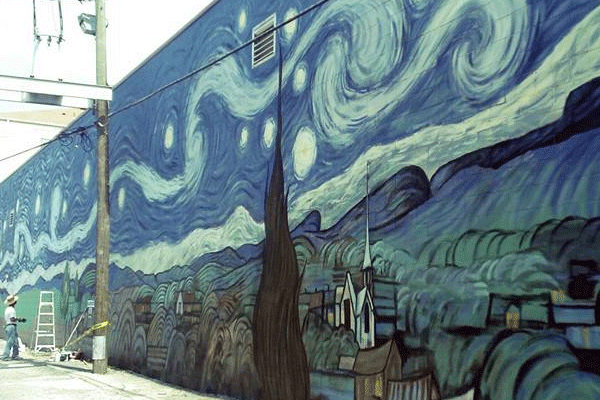 Findlay has a surprisingly large art culture for a city of its size, and this is most obviously evident in our murals. We might not be know for these large works of art YET but Findlay has seen several new murals go up over the last 2 years. Oscar Velasquez of Macedonia has contributed some absolutely gorgeous murals to the walls of Findlay businesses. The most recent set of murals depict two of Vincent Van Gogh’s famous paintings: Starry Night and Café Terrace at Night.