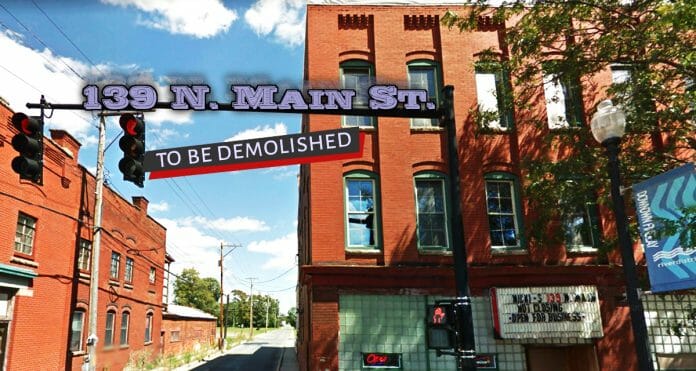 The building located at 139 N. Main Street has seen several businesses come and go over its 111-year lifetime. It was built by the Hollinger family to house Hollinger Candy, a confectioner and cigar shop. You can read more about this historic Findlay business in this November 2017 Courier article. As the article states, a second candy business opened after Hollinger closed in 1932.
Current Findlay residents will recognize the building as Nicki’s night club. The bar’s owner and namesake, Nyoka ‘Nicki’ Decker, passed away in July of 2017. In August of 2017, the Federal Emergency Management Agency (FEMA) provided a grant for the county to purchase the lot.
The county commissioners approved of the purchase in January of this year. According to the article linked, “The building will be demolished and the green space left vacant to reduce the amount of damage caused by flooding in the area.”
The building is the last standing on that block after the others were demolished after the 2007 flood. Much of the 200 block has also been demolished over the last couple of years due to flooding, and a fire. A portion of the 200-block is currently for sale.
More information about bids for the demolition can be found in the Courier on Friday, April 13th.

An Intro to Integrity Chiropractic and Wellness